As a Canadian, I’m realizing now that we northern fume enthusiasts are slightly crippled compared to our neighbor to the south. I had no idea perfume samples were doled out with such abandon in the US. I haven’t travelled abroad since my perfume affliction took hold so I can’t speak for the sample situation anywhere else, but man – you Americans have it good. I was bowled over when I spied these containers at practically every counter during a scout of the Nordstrom fragrance section:

As you can probably guess by my reaction, we have nothing like this in Canada. Samples are given out stingily or at special events only. And they are generally never offered.
A little giddy and not really knowing the lay of the land, I picked up one of the empty spray sample vials and started making myself a sample of the exclusive Guerlain L’Art et la Matière fragrance, Cuir Beluga, which to my surprise and delight was sitting oh-so accessibly on a shelf with every other Guerlain perfume. 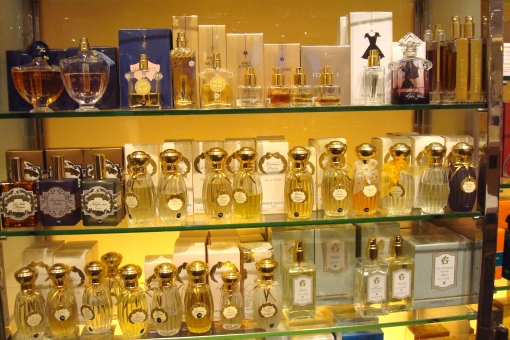 An SA instantly appeared and offered to label it for me. “Uh, sure,” I said as I handed it to her. She hurried off and rushed back with the sample carded. In the meantime, I’d started on making a sample of another L’Art et la Matière fragrance, Angelique Noire. “I’m happy to make samples for you.” she said. Oh. Is that how it works? I handed it to her and asked for some Mitsouko as well for good measure. “Right away,” was her answer.

The Bond No. 9 counter was right next to the section we were in so I asked if I could try New Haarlem. I was immediately handed off to another SA who actually seemed excited to help me. New Haarlem has practically reached mythical status in my mind since I’ve read and heard about it for so long without the opportunity to try it. I was cruising for a let down but remarkably, I was impressed. It’s actually more refined than I expected. The lavender top notes keep it fresh and inedible even as the coffee note swoops in. This isn’t a frappuccino dumped on your wrist as I’d feared, but an aromatic frag with a warm, unexpected coffee aroma. Undoubtably encouraged by my oohing and awing, the SA practically fell over herself to make me a sample.

I may have to move. 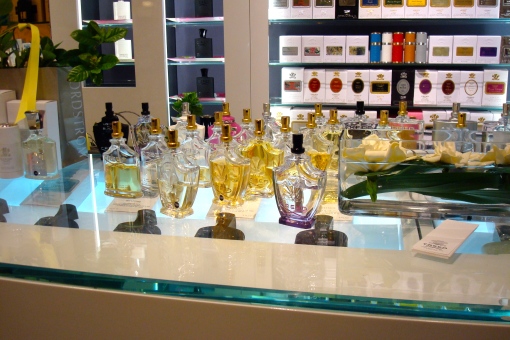 As I cruised the rest of the section, I reminded myself of Chanel Sycamore and Diptique L’Ombre Dans L’eau with a spritz to each wrist (I either already have or have had samples), made notes to come back and try some Creeds and some Annick Goutals. As I was leaving, I found a lonely bottle of Tonka Imperiale (another L’Art et la Matière) on a Guerlain makeup display. With no SA’s in sight, I made the most of the baskets of samples and helped myself to one.

I’ve read that Nordstrom has plans to expand into Canada (though unfortunately not to the West Coast where I live). I look forward to it regardless, as their sample policy will most likely force other retailers in Canada to do the same.

I will live in hope.